Colposcopy is the direct magnified inspection of the surface of a woman’s genital area, including the cervix, vagina, and vulva, using a light source and a binocular microscope. Doctors use this test to evaluate potentially cancerous areas, typically after a Pap smear has indicated the possibility of such a problem.
The doctor also may perform a biopsy (take a sample) of an abnormal area during the procedure. Colposcopy also can be used to detect inflammatory or infectious changes, harmless or cancerous growths, and traumatic injuries to the cervix, vagina, and vulva. The procedure is a highly specialized procedure and should be performed by an experienced surgeon. 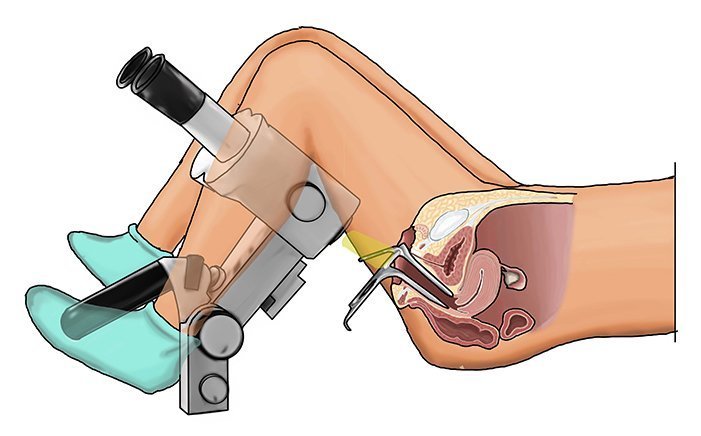 A colposcopy procedure may also be used to diagnose and assist in the treatment of the following conditions:

The organs and structures of the female pelvis are:

Other related procedures that may be used to diagnose or treat cervical and vaginal conditions include Pap test, cervical biopsy, and loop electrosurgical excision procedure (LEEP). When cervical or vaginal problems are found during a pelvic examination, or abnormal cells are found during a Pap test, a colposcopy may be performed. Through the colposcope, the doctor can see certain changes in cervical and vaginal tissues, such as abnormal blood vessels, tissue structure, colour, and patterns. Cells that appear to be abnormal, but are not cancerous at the present time, may be identified as precancerous. The appearance of these abnormal cells may be the first evidence of cancer that develops years later.

If abnormal tissue is seen during a colposcopy, a small sample of tissue (called a colposcopic biopsy) may be taken for further study. The doctor may also take tissue samples from inside the cervix using an endocervical brush or endocervical curettage (ECC).

A colposcopy may be performed on an outpatient basis, or as part of stay in a hospital. Procedures may vary depending on the patient’s condition.  Generally, a colposcopy follows this process:

After a colposcopy procedure, the patient may rest for a few minutes before going home. If the patient undergoes a colposcopy with a biopsy, the recovery process will vary, depending on the type of biopsy performed and the type of anaesthesia (if any) used. If regional or general anaesthesia was used, the patient will be taken to the recovery room for observation. Once blood pressure, pulse, and breathing are stable and the patient is alert, she will be taken to the hospital room or discharged home. If this procedure was performed on an outpatient basis, the patient should plan to have another person drive her home.

The patient will be required to wear a sanitary pad for bleeding. If a biopsy was performed, it is normal to have some mild cramping, spotting, and dark or black-coloured discharge for several days. The dark discharge is from the medication applied to the cervix to control bleeding. If a biopsy was performed, the patient is usually instructed not to douche, use tampons, or have intercourse for one week after the procedure, or for a period of time recommended by the doctor.  The patient may also have other restrictions on her activity, including no strenuous activity or heavy lifting. The patient may resume normal diet unless the doctor advises differently. Pain relievers can be taken for cramping or soreness as directed by the doctor. Aspirin or certain other pain medications may increase the chance of bleeding. Hence only recommended medications should be taken.

The doctor will advise the patient on when to return for further treatment or care. Generally, women who have had a cervical biopsy will need more frequent Pap tests.

The doctor should be notified if the patient notices any of the following:

Colposcopy is done when results of cervical cancer screening tests show abnormal changes in the cells of the cervix. Colposcopy provides more information about the abnormal cells. Colposcopy also may be used to further assess other problems:

Sometimes colposcopy may need to be done more than once. It also can be used to check the result of a treatment.

If you have a colposcopy without a biopsy, you should feel fine right away. You can do the things you normally do. You may have a little spotting for a couple of days.

If you have a colposcopy with a biopsy, you may have pain and discomfort for 1 or 2 days. Over-the-counter pain medications can be helpful. You may have some vaginal bleeding. You also may have a dark discharge for a few days. This may occur from medication used to help stop bleeding at the biopsy site. You may need to wear a sanitary pad until the discharge stops.

Your health care provider may suggest you limit your activity for a brief time. While the cervix heals, you will be told not to put anything into your vagina for a short time:

This usually means that some changes have been found on the cervix. These early changes act as early warning signals that cervical cancer may develop in the future. It is very rare that these changes are cancer.