An appendectomy is the surgical removal of the appendix, a tube about six inches long or less, that branch off the large intestine.

The procedure is performed to treat appendicitis, an inflammation of the appendix caused by infection.

Acute appendicitis is the most common condition of the abdomen to require emergency surgery. Because of the likelihood of the appendix rupturing and causing a severe, life-threatening infection, the usual recommendation is that the appendix be removed as soon as possible. 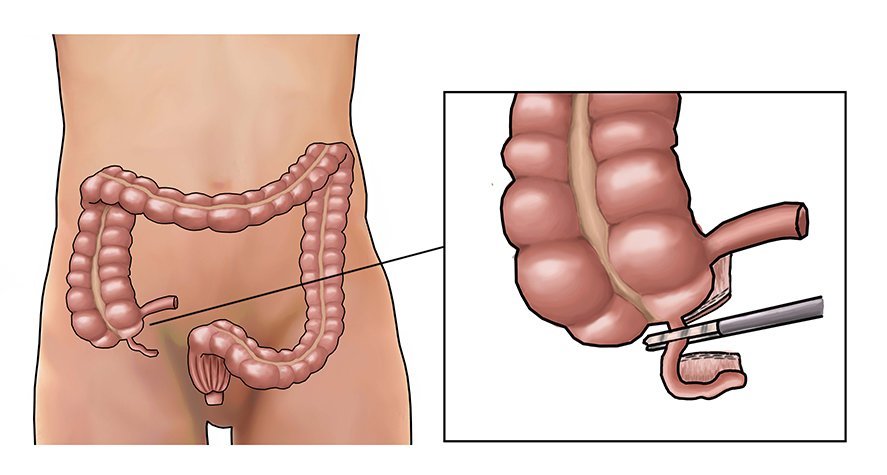 Because of the risk of rupture, which may occur as soon as 48 to 72 hours after symptoms begin, appendicitis is considered an emergency and anyone with symptoms needs to see a doctor immediately.

The symptoms of appendicitis may resemble other medical conditions or problems. In addition, each individual may experience symptoms differently. Always consult your doctor for a diagnosis.

It is important that people with symptoms of appendicitis not take laxatives or enemas to relieve constipation, as these medications and procedures can cause the appendix to burst. In addition, pain medication should be avoided, as this can mask other symptoms.

The appendix may be removed in one of the two ways:

During a laparoscopic appendectomy, your doctor may decide that an open appendectomy is needed.

Open and laparoscopic techniques are thought to be comparable in terms of low rates of complications. However, length of hospital stay, length of overall recovery, and infection rates are reportedly lower with laparoscopic appendectomy.

An appendectomy is performed to remove the appendix when appendicitis is strongly suspected. During other abdominal surgical procedures, the appendix may be removed as a precaution to prevent future inflammation or infection of the appendix. There may be other reasons for your doctor to recommend an appendectomy.

In general, an appendectomy is performed as emergency surgery and may require a hospital stay. Procedures may vary depending on your condition and your doctor’s practices.

An appendectomy is generally performed while you are asleep under general anesthesia.

Generally, the appendectomy follows this process:

Patients tend to recover quickly after a simple appendectomy. Most patients leave the hospital in 1 to 2 days after surgery. You can go back to your normal activities within 2 to 4 weeks after leaving the hospital.

Patients who have the appendix removed through small surgical cuts tend to recover and get back to their daily activities faster.

Living without an appendix causes no known health problems.

The appendix produces a bacteria destroying protein called immunoglobulins which help fight infection in the body. Its function, however, is not essential. People who have had appendectomies do not have an increased risk toward infection. Other organs in the body take over this function once the appendix has been removed.

Appendicitis is one of the most common surgical problems. One out of every 2,000 people has an appendectomy sometime during their lifetime. Treatment requires an operation to remove the infected appendix. Traditionally, the appendix is removed through an incision in the right lower abdominal wall. In most laparoscopic appendectomies, surgeons operate through 3 small incisions (each ¼ to ½ inch) while watching an enlarged image of the patient’s internal organs on a television monitor. In some cases, one of the small openings may be lengthened to 2 or 3 inches to complete the procedure.

Results may vary depending upon the type of procedure and patient’s overall condition. Common advantages are:

Although laparoscopic appendectomy has many benefits, it may not be appropriate for some patients. Early, non-ruptured appendicitis usually can be removed laparoscopically. Laparoscopic appendectomy is more difficult to perform if there is advanced infection or the appendix has ruptured. A traditional, open procedure using a larger incision may be required to safely remove the infected appendix in these patients.

The words “laparoscopic” and “open” appendectomy describes the techniques a surgeon uses to gain access to the internal surgery site.

Most laparoscopic appendectomies start the same way. Using a cannula (a narrow tube-like instrument), the surgeon enters the abdomen. A laparoscope (a tiny telescope connected to a video camera) is inserted through a cannula, giving the surgeon a magnified view of the patient’s internal organs on a television monitor. Several other cannulas are inserted to allow the surgeon to work inside and remove the appendix. The entire procedure may be completed through the cannulas or by lengthening one of the small cannula incisions. A drain may be placed during the procedure. This will be removed before you leave the hospital.

In a small number of patients the laparoscopic method is not feasible because of the inability to visualize or handle the organs effectively. When the surgeon feels that it is safest to convert the laparoscopic procedure to an open one, this is not a complication, but rather sound surgical judgment. Factors that may increase the possibility of converting to the “open” procedure may include:

After the operation, it is important to follow your doctors instructions. Although many people feel better in just a few days, remember that your body needs time to heal.

It is important for you to recognize the early signs of possible complications. Contact your surgeon if you have severe abdominal pain, fever, chills or rectal bleeding.

Be sure to call your physician or surgeon if you develop any of the following: